This article was first published Nov 19, 2019 in the SF Bay View newspaper.

It’s always hard to stomach news that is disheartening. To hear that a brother and comrade has suffered a stroke after spending countless years in solitary confinement, as well as being held on an indefinite sentence for an alleged crime he did not commit, is even more disheartening.

I need not stress the sorrow that is felt amongst the whole prison population for our brother Sitawa Nantambu Jamaa, who, along with countless fearless prisoners, pioneered our Prison Human Rights Movement (PHRM) to the world’s stage. We continue to see men and women incarcerated far too long – beyond anyone’s imagination – and continue to be held indefinitely.

Our beloved brother Sitawa is amongst this class of men and women. The inhumane treatment of prisoners must end.

A large rally that garnered support from outside and raised spirits inside was at Corcoran Prison in the Central Valley on July 13, 2013, during the last hunger strike, where the prisoners were suffering the summertime heat combined with gnawing hunger. On a “solidarity fence,” notes composed of quotes from some of the leading strikers were pinned to a fence to inspire the demonstrators. This is a quote from Sitawa.

Our brother Sitawa and many others have suffered enough and should not continue to do so based on being given a life sentence that equals a civil death. Prior to 1968, under original Penal Code Section 2600, California prisoners suffered complete civil death, which means prisoners were stripped of all civil rights.

The prison system is actually covertly executing all of its lifers. The United States is the only country in the whole world that incarcerates people indefinitely – forcing them to spend the rest of their lives in prison. Men and women have been incarcerated for 35 years or more.

Many of these people are lost in time. They came to prison as youth in their teens and early 20s in the ‘60s, ‘70s and ‘80s. Yes, many of them were immature, many had no real direction, but they all became adults in the Amerikan prison system.

At present these prisoners, Baby Boomers, most of whom have survived decades of incarceration, are now between the ages of 60 and 80. Many of these senior citizens are wheelchair-bound or use assistive devices such as walking canes.

Like most seniors, many are on special medications, require special medical therapy for seniors, and suffer from aging illnesses of various sorts. I hear some say that a few manage to get around good at 70 years young.

Many say, yes, they should be in prison, and that may be true in some cases. Given the things they did in society, the way they carried themselves in the youth of their lives was utterly wrong and disrespectful, but that was decades ago when they were young! Decades!

They are now older, mature, grown, senior adults, who have fulfilled all requirements from various parole boards around the U.S. Multiple prisoners have complied with all laws, rules and regulations of the prison and carried themselves as role model human beings and in many cases have done so for decades.

Sitawa is able to embrace his sister after decades of seeing her only though thick glass. 2016 photo of their first hug in 31 years. His sister, Marie Levin, rose during the terrifying hunger strikes to lead the fight by outside family and supporters to end solitary confinement and other atrocious prison practices.

Still, many of them are forced to remain in prison when the maximum amount of time on their sentence has long since expired. This is terrible and extremely cruel to force rehabilitated human beings to remain in bondage and especially when statistics clearly show that 90 percent of them are not returning to prison once released.

Sadly, 89 percent of prisoners across the US are Black and Mexican. From 1619 through the 1800s, the chattel slavery plantation concept lurks in the shadows like the Wizard of Oz.

This “behind the scenes” type strategy involves money laundering exclusively into white rural areas under the Prison Industrial Slave Complex (PISC). (That’s where prisons were built during the height of mass incarceration, in small rural communities that had lost their economic base, where people were so desperate for jobs, they were willing to work in a prison. These were white communities with deep prejudice toward Blacks. – SF Bay View ed.)

Many of us may very well die in these man-made tombs. It should be stipulated that these deaths are in clear violation of the Eighth Amendment of the US Constitution, which prohibits cruel and unusual punishment.

The suffering is indefinite where there exists no end to the punishment. Many have died, and many will continue to die where there is no remedy to resolve the cruel and unusual treatment of prisoners.

We must resist to end this cruel and unusual treatment of human beings and encourage our brother Sitawa, who is fighting for his life. We will fight for his freedom and the freedom of the thousands of men and women lost in time.

One Love, One Struggle, 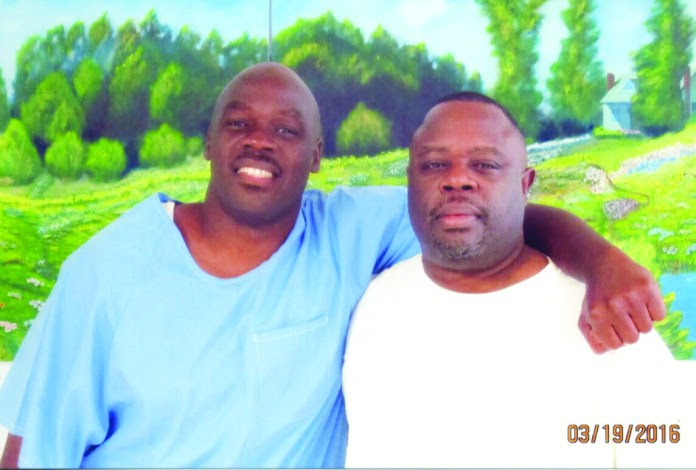 Mutope had the joy of hugging his brother Anthony in this photo taken March 19, 2016.