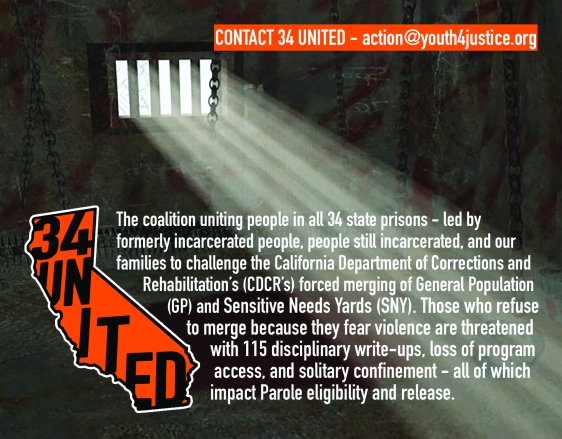 34 UNITED: The coalition uniting people in all 34 state prisons, led by formerly incarcerated, people still incarcerated, and our families to challenge the California Department of Corrections & Rehabilitation’s (CDCR’s) forced merging of General Population (GP) and Sensitive Needs Yards (SNY). Those who refuse to merge because they fear violence are threatened with 115 disciplinary write-ups, loss of program access, and solitary confinement – all of which impact Parole eligibility and release.

To register or for more information, email 34 UNITED: action@yourthforjustice.org

Greetings and solidarity to each other and all who participated in our initial Hunger Strike to end the arbitrary use of solitary confinement and inhumane treatment in Santa Clara County Jails.

Before we set off into the body of this letter we would like to extend our respect and appreciation to all who participated and sacrificed to provoke change. Although we came from diverse backgrounds be it race, religion, color or creed we set out differences aside, inter-locked arms forming a formidable force through civil disobedience in solidarity.

Allow the sacrifices each participant has made be inspiration to others to join in our struggle, allow our peaceful protest to demonstrate the power of unity and the positive changes that can be effected when we view each other not as classification of inmates defined by the color of clothing issued to prisoners by administration but instead as human beings who share the same oppressive conditions.

For decades prisoners have been slammed down in solitary confinement, locked away from education and rehabilitation programs or barred from participating in fellowship of their faith due to administration beliefs … Meanwhile our families are being exploited with practices that amount to price gouging through exorbitant commissary and phone rates. While they survive in a region with rising rent cost plagued by a homeless epidemic in city with ordinances that throws people in jail for having no place to live… Let’s be thankful we have religious leaders and community organizations like De-Bug who rally behind us to champion our cause and see us different, who are the difference, who see us as human beings, who are not persuaded by those in positions of authority whom define us by our allegations and classification rhetoric to pump fear in the heart of the public in their effort to kill our support base when they are preoccupied beating us to death like Michael Tyree … In the spirit of thankfulness perhaps one might consider reaching out to their family and friends letting them know they are appreciated; we appreciate you and yours for your support so Thank You!

Before we bring this letter of appreciation to a close we would like to abreast the prisoner population that our hunger strike has not ended, it has been momentarily suspended. We gave administration (30) days to bring about tangible changes for the benefit of all prisoners. We will continue our efforts until all of our core demands have been met. We will not be duped by the superficial such as movie night and a snack, we must persist as a collective that stands firm on principle. We must not be deluded by a carrot on a stick offered to us by an oppressed system that is fueled by greed and political ambitions.

To prevail in our struggle for prisoners human rights we respectfully ask the prisoner population to exercise diplomacy for it is not in our own interest to engage in combat with one another when we are fighting together to improve our conditions of confinement. We ask those of you who sway influence in our housing unit to work with each other to resolve conflict peacefully by promoting prisoner solidarity. Let’s try not to provide ammunition to the administration that allows them to justify the reasoning for the use of solitary confinement. Our goal is to promote our cause by unifying like-minded people to support our next planned Hunger strike.

In closing, we thank you for your time.

Statement of plaintiffs on settlement of Ashker v. Governor of California

This settlement represents a monumental victory for prisoners and an important step toward our goal of ending solitary confinement in California, and across the country.  California’s agreement to abandon indeterminate SHU confinement based on gang affiliation demonstrates the power of unity and collective action.  This victory was achieved by the efforts of people in prison, their families and loved ones, lawyers, and outside supporters.

Our movement rests on a foundation of unity: our Agreement to End Hostilities.  It is our hope that this groundbreaking agreement to end the violence between the various ethnic groups in California prisons will inspire not only state prisoners, but also jail detainees, county prisoners and our communities on the street, to oppose ethnic and racial violence.  From this foundation, the prisoners’ human rights movement is awakening the conscience of the nation to recognize that we are fellow human beings.  As the recent statements of President Obama and of Justice Kennedy illustrate, the nation is turning against solitary confinement. We celebrate this victory while, at the same time, we recognize that achieving our goal of fundamentally transforming the criminal justice system and stopping the practice of warehousing people in prison will be a protracted struggle.  We are fully committed to that effort, and invite you to join us.

“This litigation was led by the plaintiffs – those held in the SHU – from the beginning, not the lawyers, who properly understood their role as carrying out the strategy of those they represented to fight for their release and further their movement. It should be studied.”  Bret Grote, Attorney, Abolitionist Law Center

After decades in solitary they joined forces. Here’s what happened.

video by Center for Constitutional Rights