Aug. 14, 2013 – I would like to reiterate that the Agreement to End All Hostilities, issued August 12, 2012, is significant for all prisoners because CDCR (California Department of Corrections and Rehabilitation) has encouraged prisoners in their 33 prisons to not only engage in self-destructive behavior but has also helped heighten racial hostilities – the catalyst for internal warfare, racial warfare and gang warfare – all of which has been magnified inside the prisons and throughout our communities. 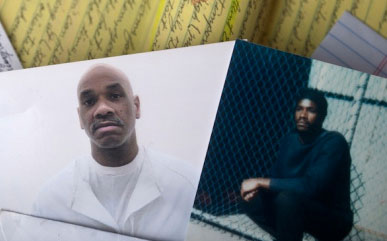 Sitawa Nantambu Jamaa, s/n Ronnie Dewberry, is shown in pictures taken in 2012 and 1988. After over 20 years of refusing to allow prisoners in the Pelican Bay SHU to be photographed, administrators relented in the past few months, taking pictures that prisoners can share with their loved ones. Pelican Bay is so remote that many prisoners’ families are unable to visit often, so they treasure a recent photo. – Photo: Adithya Sambamurthy, CIR.

We decided to address these contradictions head on by engaging in a dialogue that was meaningful, sincere and honest with each respective entity. We realized that our responsibility was to end actions that were contrary to the growth and development of each and every prisoner.

We have been attempting to end hostilities for the last 13 years, but the CDCR was not a willing participant in the process. In 2000, we were allowed to get together and work on ending racial and gang riots and to end internal violence.

The CDCR, after realizing that we were successful in our attempts, became very irritable and obstructionist toward our work and proceeded to deliberately sabotage it. During a racial riot in 2000, a young prisoner was murdered by a prison guard. Young prisoners were being murdered in these racial riots; their actions were used by prison guards to justify their being shot for being armed with a weapon – i.e., a makeshift prison knife.

Countless prisoners have been murdered in cold blood under the CDCR’s “no warning shot policy.” The prison guards justify killing the prisoners because, they say, they thought they saw a weapon or witnessed one prisoner advancing on another. We consider this to be cold blooded murder. We called for an end to hostilities to eliminate giving prison guards an excuse to kill prisoners.

We realize that the justification for locking men and women away in solitary confinement on prison gang validations indefinitely while also subjecting us to a military debriefing process as the only way to program out constitute attacks to our physical and psychological well-being. Prisoners can no longer withstand such torture. 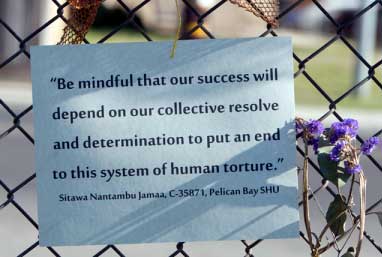 Hunger striker supporters displayed photos and quotations from several of the movement leaders, including Sitawa, at the July 13 rally outside Corcoran State Prison. – Photo: Malaika Kambon

This process has led to many debriefings and mentally ill prisoners throughout CDCR: in PBSP-SHU, Corcoran SHU, Tehachapi SHU, Folsom SHU and San Quentin Adjustment Center (Death Row). As people who have suffered under such a brutal, diabolical system, we realize that it is our responsibility to help change the course of violent prison systems that have made their way to our communities.

Orchestrated activities are carried out by debriefers and collaborators whose sole role is to maintain hostilities and deepen infiltration and entrapments within our communities in association with the law enforcement in the streets.

We had been talking about playing a greater leadership role for the last 13 years throughout the PBSP-SHU, but we were unable to agree collectively due to our isolation. So when powerful entities within the California prison system – Institutional Gang Investigators (IGI), Investigations Services Unit (ISU) and Office of Correctional Safety (OCS) – isolated us together in the short corridor, a super-max SHU, we were able to re-open our dialogue and agreed to ending the blatant attacks that our families, friends and associates were being subjected to – the same attacks that we were being subjected to in solitary confinement.

We called for an end to hostilities to eliminate giving prison guards an excuse to kill prisoners.

We realize nothing productive can be done to change the current state of our situation, our prison environment, unless we end the hostilities between prisoners and end all racial and gang violence within the CDCR.

We feel that prisoners are the victims of a systematic process that manipulates them through racial and gang violence in order to prevent greater unity.