Jorge Rico is incarcerated in Pelican Bay State Prison and has brought a civil rights lawsuit challenging the constitutionality of the loud “security/welfare checks” that he (and others) in Pelican Bay’s solitary units endure every 30-60 minutes 24/7. These so-called “checks”- done by guards – wake and disturb prisoners day and night causing serious sleep deprivation and, as his lawsuit claims, constitute cruel and unusual punishment.as his lawsuit claims, constitute cruel and unusual punishment. (The guards do no checking on top of that). Sleep deprivation is internationally recognized as torture.

Please RALLY at 9am on May 18 in support of Jorge Rico’s case against the “security/welfare checks” and in public outrage against the jarring noise and sleep deprivation they cause. At 10am, after the rally, help form a STRONG COURTROOM PRESENCE at the hearing in his case.  Show solidarity with Jorge Rico while his attorneys argue that his case should not be dismissed at CDCR’s request.

The CA Department of Corrections and Rehabilitation (CDCR) will argue for the court to dismiss Jorge’s civil rights case. Jorge’s lawyers will argue that the case against CDCR administrators, guards, and wardens, must move forward. HERE is a link to Jorge Rico’s Opposition to CDCR’s motion to dismiss.

The PHSS Committee to End Sleep Deprivation asks you to help make a powerful showing of solidarity with Jorge and all people in CA solitary confinement who are suffering from the checks, and who cannot be in the courtroom or outside rallying and speaking about their experience.

9:00am RALLY outside the Courthouse
10:00am COURTROOM SOLIDARITY with Jorge Rico,
prisoner who brought this case (Crtrm #27, 8th Floor)

After the hearing, Jorge’s attorney, Kate Falkenstein, will be available briefly outside the courthouse to speak with community supporters and media.

Note: You must show ID and pass through a metal detector to get inside the Courthouse. 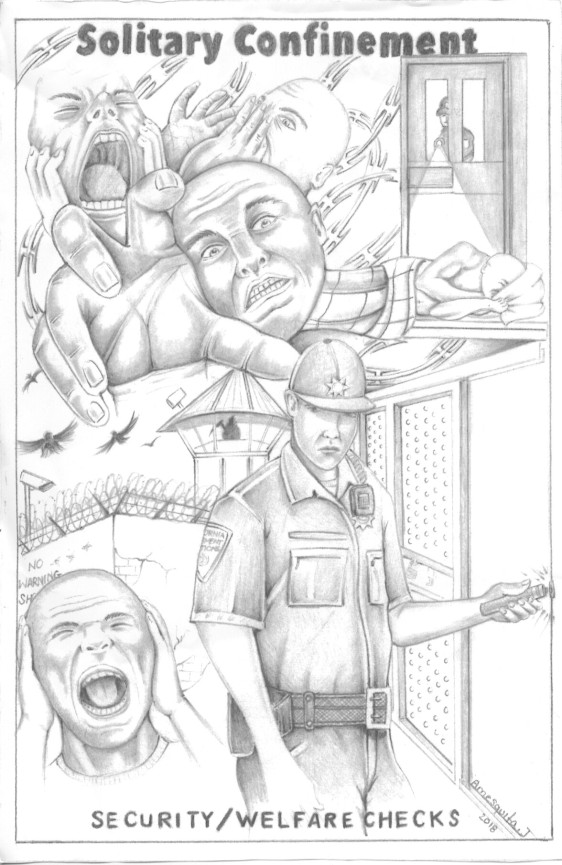 Artwork by Jaime Amesquita, in High Desert State Prison. “I’m hoping that maybe through the publishing of my art I can bring attention to the long term effects brought by security/welfare checks, like sleep deprivation or PTSD.”

One way CDCR is attempting to get rid of the civil rights cases against the checks is by claiming that the guards and administrators causing the sleep deprivation and harm are only ‘following orders’ and not violating any clearly established right. We recall these words from a person in Pelican Bay solitary, who, like Jorge, has been subjected to the checks’ loud, reverberating banging noise every 30 minutes 24/7 in a small, enclosed concrete and metal cell:

“For decades, military and police forces have used extreme isolation, sleep deprivation and constant banging/noise to cause mental/physical torment and try to break a person’s mind or human will to resist questioning. These are so-called clean torture methods. So CDCR/Pelican Bay State Prison cannot possibly claim, ‘We did not know the cause or effect of this new program’s use of extreme isolation, sleep deprivation, and constant noise/banging.’”

“It has been clearly established in the Ninth Circuit, since the 1990s, that inmates are entitled to conditions of confinement which do not result in chronic, long term sleep deprivation.”

These “security/welfare checks” have been occurring for almost three years in Pelican Bay State Prison.