A number of hardy souls ventured to Sacramento on May 18, 2018 to a federal court hearing on CDCr’s motion to dismiss Jorge Rico’s suit opposing the every half hour Guard One “security/welfare checks” that take place in isolation units throughout the state. With Guard One, guards press a metal baton into a metal receiver positioned either in or besides cell doors, making a loud disruptive noise in most cases, waking prisoners up every 30 minutes and causing sleep deprivation. The good news is that the magistrate judge, Deborah Barnes, gave every indication she will deny CDCr’s motion and will move the case to its next stage. She suggested several times to CDCr’s lawyers that at this very early stage of the case, there was no basis for a motion to dismiss, and she said at least twice “I’m really struggling with your arguments.” 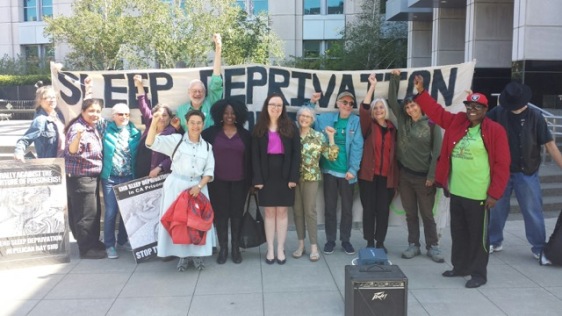 There are currently 6 suits against the “checks” before this judge, and Kate Falkenstien, above in the center wearing a pink blouse, represents 3 of them, including that of Jorge Rico. In a press conference after the hearing, she explained the 3 arguments of CDCr.

In a motion they filed the day before, CDCr claims that because Mr. Rico has been moved from Pelican Bay SHU to general population, the case is now moot. The judge asked “Can’t he again be moved into SHU?” Which is exactly what has happened. During the last year or so, he’s gone from SHU to RCGP (from where he filed the suit) to SHU to Ad Seg  to SHU and now to GP.

The judge said that Rico’s claim would be viable for damages, but it was “questionable” whether injunctive relief could be sought.  [The judge’s point being that, at the present time, the conduct that would be enjoined does not affect Rico, the sole plaintiff in this case, because he is no longer in SHU.]

Prisoner rights campaigner Marie Levin commented outside the courthouse, “Regardless of Mr. Rico’s present or future housing assignment, he still suffered what he suffered when he suffered it.”

Second, CDCr argues that although sleep deprivation is illegal, they don’t think it’s illegal to keep people awake in this way. They didn’t know it was wrong. Ms. Falkenstien brought up a case from Alabama, Hope v. Pelzer, in which Alabama prison guards tied Mr. Hope to a hitching post with his shirt off in the sun for seven hours, offering him water twice and never a bathroom break. He sued, under the grounds that this was a violation of the 8th amendment guarantee against cruel and unusual punishment. Alabama said they knew it was illegal to tie a person for a sustained time to a fence or a cell door, but they didn’t think it was illegal to tie a person to a hitching post. The Supreme Court ruled for Mr. Hope.

CDCr’s third argument is that the Coleman judge has already ruled that Guard One is acceptable. Ms. Falkenstien argued for Rico that Coleman was a case involving mental illness, and neither Jorge nor many other prisoners undergoing the “checks” are mentally ill, and that even if one case has been decided, each person should be able to be heard in court.

In Ms. Falkenstien’s original brief in opposition to CDCr’s motion to dismiss, she argued 1) an Eighth Amendment challenge to the Guard One checks  was not actually litigated in Coleman, 2) Rico Is neither a Coleman Class Member nor in privity  with Class Members, and 3) the Coleman order can also be collaterally challenged,  because none of the Coleman class representatives are  affected by the Guard One checks.

Commenting on CDCr’s claims, the judge remarked that it was well established that sleep deprivation can rise to the level of an 8th Amendment violation. She said she was having a hard time with CDCr’s argument, and further, that she would be shocked to find any mention of sleep deprivation in Coleman, or anything in Coleman saying that if the checks using the Guard One system cause sleep deprivation, “that’s okay.”

Judge Barnes declined to dismiss the case and on Monday, May 21, 2018 she ordered the parties to brief the mootness issue (about Mr. Rico currently being out of the SHU) before she rules on the motion to dismiss.  The briefing is going to take about a month in total, so we won’t have a final answer about whether the case will be dismissed until the end of June at the earliest. We are optimistic, however, she will dismiss CDCr’s motion and move forward with the case.

pdf of this Report (with photo) HERE