In prison isolation units throughout California, guards wake prisoners up every 30 minutes under the guise of suicide prevention. These “security/welfare checks” cause ongoing sleep deprivation. The United Nations and many sleep and mental health experts have long defined sleep deprivation as a form of torture, and sleep deprivation often is used as a torture technique for prisoners of war. So California tortures its prisoners to prevent them from killing themselves.

Dr. Jamie Zeitzer, Ph.D., an expert in sleep and circadian rhythms, concluded in a 2015 report:

“The current practice of 30 minute … checks of inmates housed in the [Security Housing Units] is likely a cause of severe sleep disruption … The mandated purpose of these … checks (i.e. suicide prevention) is, in fact, likely to have the opposite effect and inadvertently increase suicidality in these individuals … There have been no direct studies of intentionally waking an individual every thirty minutes every night for days, weeks, or months, as doing so would be considered highly unethical in a research environment.”

Yet this is the reality for people housed in California’s Security Housing Units (SHUs), Administrative Segregation Units (Ad-Segs/ASUs), Condemned Units (death row) and Psychiatric Services Units (PSUs). In these solitary confinement cells, prisoners are kept alone 24 hours a day with no direct contact with other people — except guards. Known effects of such isolation include suicidal thoughts and behavior, yet the California Department of Corrections and Rehabilitation (CDCR) fails to provide adequate, if any, mental or physical health services. Instead, it keeps people locked up in brutally oppressive conditions, and jars them awake every 30 minutes, purportedly to see if they’ve committed suicide. 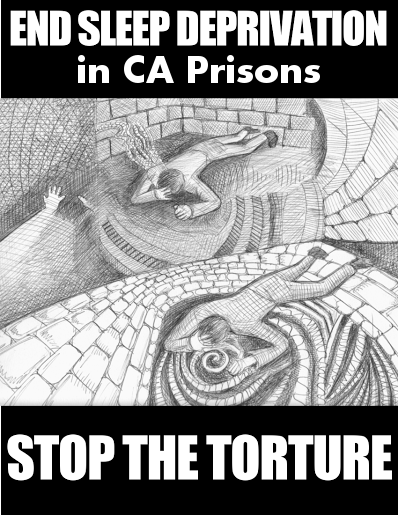 CDCR does not even acknowledge that prolonged isolation is torture and psychologically harmful. They use the “checks” as a blanket practice, whether or not prisoners are suicidal and despite the fact that sleep deprivation increases the risk of suicide. In CCWF death row, where the checks began in May 2014, there has not been a suicide since 1991 [pg 6 in link]; in Pelican Bay SHU where the checks began in August 2015, there has been one suicide in 13 years. Prisoners point out these histories as they question the purpose of the “checks.” These “checks” only exacerbate CDCR’s abuse of prisoners and historic refusal to compassionately treat prisoners dealing with serious mental health issues, including suicide.

“CO’s can save lives by talking to potentially suicidal inmates…”1 Good interpersonal communication skills by guards are consistently recommended to prevent suicides in prison, but such skills are rare in CA prisons. Admitting suicidal feelings to prison staff will, ironically, subject prisoners to the brutality of “suicide watch.” Prisoners report that guards use the “security/welfare checks” to be as loud and disturbing as possible.

Paradoxically, these so-called “security/welfare checks” come as the result of a settlement, theoretically a victory to improve the conditions of prisoners, in a federal class-action lawsuit, Coleman v. Governor of CA. The Coleman court determined that California prison officials did not provide adequate mental health care, thus violating prisoners’ Eighth Amendment protection from cruel and unusual punishment.

The judge appointed Matthew Lopes as Special Master to oversee CDCR’s implementation of Coleman reforms for 35,000 prisoners with serious mental illness, and Lopes brought in “suicide expert” Lindsay Hayes as a consultant. Just prior to becoming the “suicide expert” under the Coleman Special Master, Hayes worked as a consultant for the defendant — the California Department of Corrections and Rehabilitation itself. Hayes endorses the 30-minute checks.

Even as he receives letters from prisoners suffering from the checks and those who support the prisoners from the outside, he has not responded, or, to our knowledge, recommended a change.

The California State Auditor recently released a report on suicides in CA prisons commissioned by the Joint Audit Committee of the CA legislature (http://tinyurl.com/yca9tvf5.) While the report concludes that “It [CDCR] Must Increase Its Efforts to Prevent and Respond to Inmate Suicides,” it does not address prison conditions – like brutal and racist guards and administration, solitary confinement, and the horrific “suicide watch,” when prisoners considered suicidal are “allowed only a no-tear smock or gown, a safety mattress, and a no-tear blanket. All furniture is removed, [and] staff must provide continuous, direct visual observation as well as nursing checks every 15 minutes,” instead of any kind of humane and compassionate care.

A representative from the Auditor’s office had contacted our committee for input. We provided written descriptions of the “security/welfare checks”, documentation from prisoners in 13 prisons describing the checks as torture and explaining the harm to their mental and physical health, and material opposing the checks from 3 sleep experts and the American Public Health Association. Nevertheless, the audit completely ignored the input of our committee and all “advocacy groups,” and apparently the auditor did not seek any input at all from prisoners. The report has little mention of the “security/welfare checks,” except to say 2 of the 4 prisons the Auditor examined “did not conduct these checks as required.” The report refers frequently, however, to the “suicide expert,” and calls for his recommendations to be implemented, clearly indicating support for the “security/welfare checks”.

Other experts, however, have recommended the checks be halted:

“Repeated intrusions, especially to nightly sleep, lead to a variety of negative physical, cognitive and emotional consequences, adding to the already well-documented harms of solitary confinement.… There are other strategies for suicide prevention that can be pursued in prison contexts that do not result in the suffering caused by th[is] approach …” — Jail and Prison Health Committee, American Public Health Association

“This level of [interrupted] sleep has been shown to have profound effects on cognitive performance, memory, mood, immune function, pain sensitivity, metabolism, and other parameters.… Importantly these effects accumulate across time. Thus as these checks are done nightly their negative effects will become greater across time … There is much research on disturbed sleep in Intensive Care Units in hospitals. Checking on patients for their safety has resulted in many ill effects. Today there are many initiatives to overcome the negative effects of this safety monitoring.” — Dr. Thomas Roth, PhD Chief, Sleep Disorders and Research Center, Henry Ford Hospital

“A recent series of studies in Veterans has further pointed to the strong connection between suicidality and sleep, so much so that treatment of sleep problems in Veterans is considered part of the first line of treatment in reducing the risk of suicides.” — Dr. Jamie Zeitzer, PhD. Stanford University and the VA Palo Alto Health Care System