On February 1, 2016, people from all over California gathered in Sacramento at the headquarters of the CA Department of Corrections and Rehabilitation (CDCr) to demand an end to the dangerous and deliberate sleep deprivation being inflicted on the people in solitary in Pelican Bay State Prison SHU, under the guise of “welfare checks”.

Before the Rally, more than 15 formerly incarcerated people, family members, pen pals, and other activists visited the offices of Loni Hancock (chair of the CA Senate Public Safety Senate Committee), Bill Quirk (chair of the CA Assembly Public Safety Committee), and reps from various districts to demand the immediate suspension of the sleep deprivation “welfare checks” in the Pelican Bay SHU.  Sleep Deprivation Is Torture.

from Martha Esquivel:
I’m so very thankful for having the opportunity to go to Sacramento and stand up with you all in front of CDCr and show them our unity, meet new people and listen to their stories… about how their loved ones are being tortured by CDCr, our employees. Yes, our employees. Because they get paid with our taxes, and instead of rehabilitating our loved ones who make mistakes, they are looking for methods to keep the torture going one way or another. 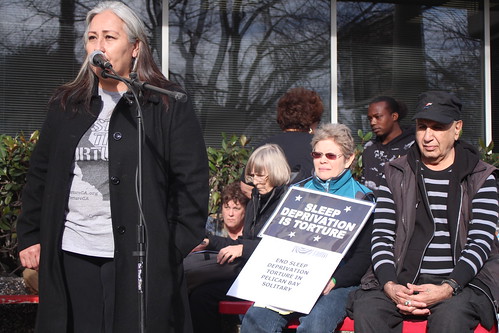 Almost 5 years ago, we were standing outside CDCr demanding CDCr stop the torture of our loved ones in Indefinite Isolation.  We proved to them that was torture. We Won and now CDCr has found another way of torturing them, by not letting them sleep. It has been 6 months of sleep deprivation and they know that it is torture.

Back in 2011, we didn’t have a clue what to do, we only knew that our loved ones were being Tortured and they needed our support. Our loved ones pushed from the inside and we pushed from the outside, and we got the Victory.  Today, we are more people fighting for our loved ones in prison. Some of them are out of the SHU, but we are still here fighting for the one’s still in the SHU. We are not leaving anyone behind. Together We know We can make a change, and we just want to let CDCr know that regarding this new chapter of torture they have created: We are going to win too, because our movement is a movement of Love, and we believe in rehabilitating humans not destroying them!
Martha Esquivel is active in California Families Against Solitary Confinement and the Prisoner Hunger Strike Solidarity Coalition; She is sister to Luis Esquivel, a named Plaintiff in Ashker v Brown, now out of Pelican Bay SHU after 15 years in solitary there.

from James Decker:
I was proud to be part of the contingent from far northern California to attend the Rally Against the Torture of Prisoners on February 1, 2016. We gathered just after noon, a group of family members, formerly incarcerated persons, activists, attorneys, and faith leaders. Diverse members of the community gathering with a single purpose: to stop the sleep deprivation torture.

I was moved by the testimony of those folks fighting for the very lives of their loved ones. More then 70 people were there to listen and demand action!  Women, mostly women of color, spoke about a racist system fueled by capitalism that has devastated their families and robbed their communities.

Thanks to the folks that helped create these powerful posters and the Artist Richard Torres. 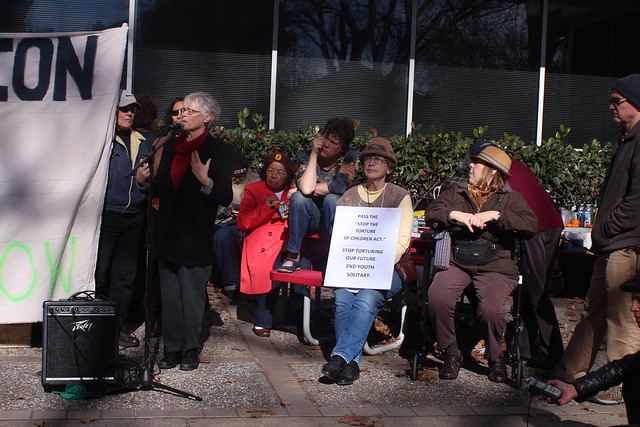 Carol Strickman gave us an update from the legal team.  The folks from Food Not Bombs in Oakland brought nutritious food.  Sarah Torres provided stirring music and chants went up spontaneously from the crowd demanding “LET THEM SLEEP!”

Cynthia spoke of the callous neglect and medical malpractice that is rampant in the prison system. It resulted in the death of her brother.

We must keep the pressure up to end this abominable behavior by the Department of Corrections and the State of California.

In solidarity,
James Decker works with Peoples’ Action for Rights and Community and the Prisoner Hunger Strike Solidarity Coalition. 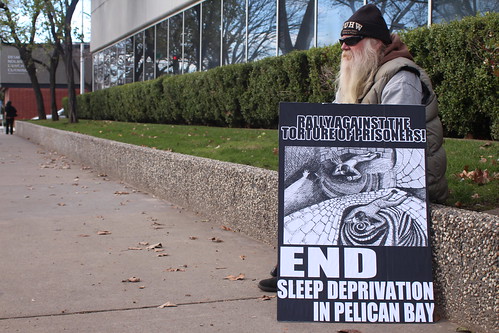 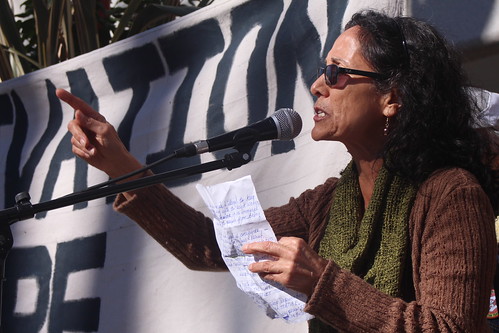 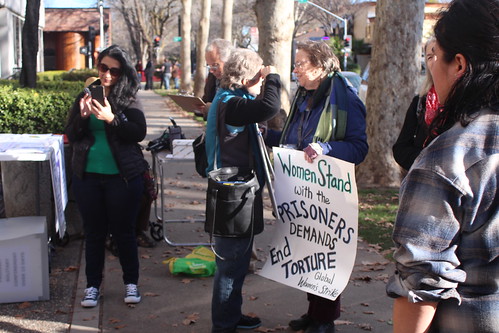 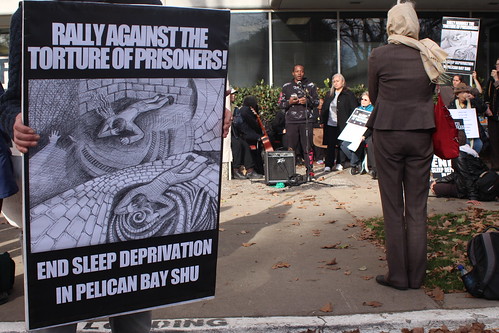 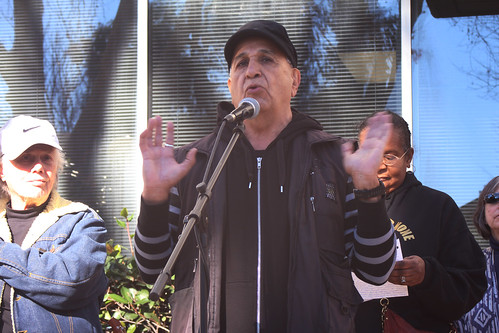 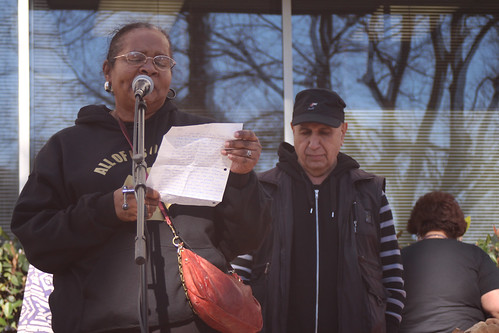 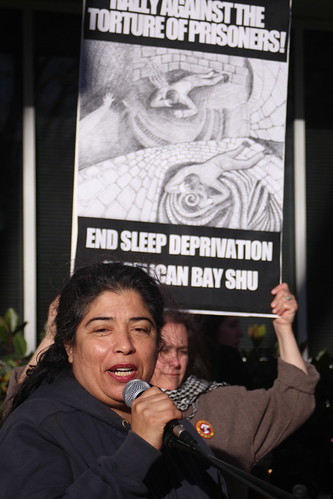 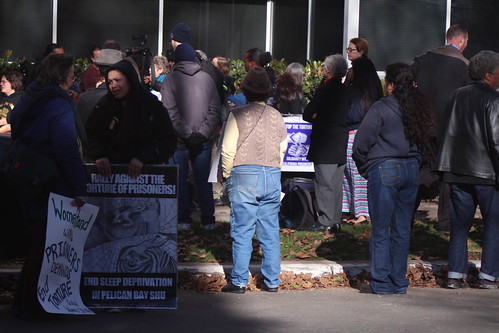 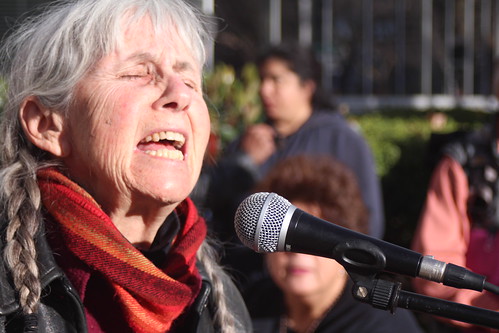 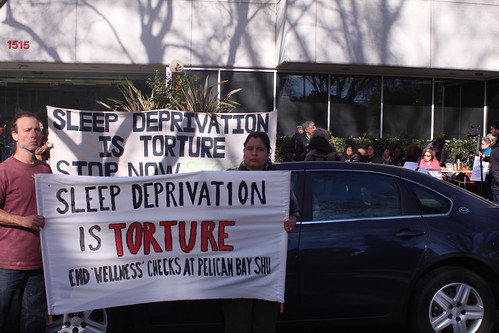